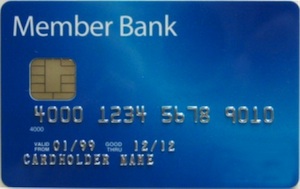 Financial institutions in the United States, Europe, Latin America, Asia/Pacific and Canada are issuing contact or dual-interface EMV smart cards for credit and debit payment or migrating to EMV issuance. According to EMVCo, approximately 1.5 billion EMV cards have been issued globally and 21.9 million POS terminals accept EMV cards as of Q4 2011. This represents 44.7% of the total payment cards in circulation and 76.4% of the POS terminals installed globally, excluding the U.S.

EMVCo developed its specifications to ensure global interoperability–so that any EMV-compliant card can be accepted at any EMV-compliant point-of-sale anywhere in the world. The EMV specifications not only define how chip cards can be used for fraud prevention but how they can be used by issuers to offer additional features to cardholders such as multiple payment applications on the same card. Chip cards can carry security credentials that are encoded by the card issuer at personalization. These credentials, or keys, are encrypted and impervious to access by unauthorized parties. These credentials therefore prevent card cloning, one of the common ways magnetic stripe cards are compromised and used for fraudulent activity. In practical terms, this means that chip card-based payment account information cannot be skimmed, which increases the level of security to prevent fraud.

Fraud prevention technology in chip-based EMV payment cards (which can be contact, contactless or dual-interface cards) complements post-fraud detection mechanisms by providing an additional layer of intelligence to protect consumers. Issuers, acquirers and merchants in a large number of markets around the world have decided to implement full EMV technology. Some programs are signature-based and others use a PIN, commonly known as “chip and PIN,” to combat fraud.

The EMV Integrated Circuit Card Specifications are managed by EMVCo, which is currently operated by American Express, JCB International, MasterCard International, and Visa International. EMV specifications were first issued in 1996 and active working groups have provided updates and revisions. In December of 2000, EMV 4.0 was released which is also known as EMV 2000. The current version of EMV is release 4.2.

At the heart of EMV is the underlying security framework that provides fraud protection for both offline and online transactions. The security is a combination of symmetric and asymmetric key technology. First, EMV leverages the security found in chip cards and requires symmetric authentication keys to be submitted to gain access to the chip card’s memory. In addition, asymmetric keys and certificates, also known as public key infrastructure (PKI), are incorporated to facilitate card authentication in offline transaction environments.

EMV and the U.S. Market

The United States is one of the last countries to migrate to EMV. American Express, Discover, MasterCard and Visa have all announced their plans for moving to an EMV-based payments infrastructure in the U.S.

In January 2012, MasterCard announced their U.S. roadmap to enable the next generation of electronic payments, with EMV the foundational technology.

In March 2012, Discover announced implementation of a 2013 mandate for acquirers and direct-connect merchants in the U.S., Canada and Mexico, to support EMV.

In June 2012, American Express announced its U.S. EMV roadmap to advance contact, contactless and mobile payments and plans to begin issuing EMV-compliant cards in the U.S. in the latter half of 2012.

U.S. credit and debit card issuers who are issuing or who have announced plans to issue EMV payment cards include:

The Smart Card Alliance Payments Council has also created a LinkedIn group, Smart.Payments, open to the public to stimulate discussion of payments-related topics.